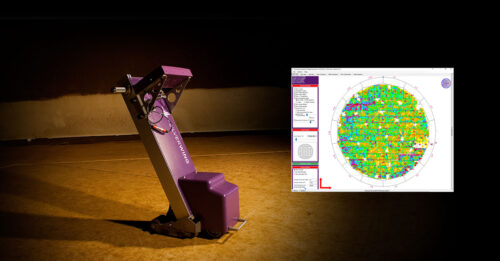 Tank inspection ensures the safety and integrity of tanks by preventing accidental leaks and avoiding costly decontamination. A common failure mechanism is a leakage through the floor, damaging the tank foundation and leading to instability. Some of the Storage tank floors in industries are required to be inspected while the tank is out of service.

IXAR performs this task using the Magnetic Flux Leakage (MFL) technique in which, a section of the bottom tank is magnetized to, or near to, a saturation of flux between the poles of the bridge. Any significant thinning of the bottom plate will result in some of the magnetic flux being forced into, or leaking into the air around the area of reduction. Sensors to detect these flux leakages are placed between the poles of the bridge. MFL is a qualitative test method, so indications located by this technology require follow-up testing mainly by ultrasonic testing in order to determine the exact size and location of the defects. 1) Magnetic Flux Leakage (MFL) is a robust corrosion detection technique. It works on the principle of Hall Effect sensors to detect the magnetic leaking field created by corrosion.

2) Surface Topology Air-gap Reluctance Sensors (STARS) that determine whether the corrosion is at the top side or bottom side. When combined with MFL user can switch between the top side, bottom side and complete plate views to show the origin of the corrosion.