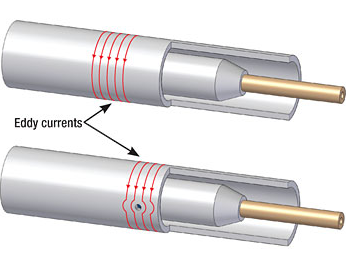 It is widely known that eddy current measurements can provide useful information on the properties of ferrous materials. Modifications of the micro-structure and of the dislocation distribution caused by heat treatment or work hardening result in variations of the magnetic domain wall motion, which affect the electromagnetic response of the sample.

While the underlying microscopic mechanism relating these quantities is difficult to describe quantitatively, the relation between the electromagnetic response and the micro-structure is a very efficient empirical tool to sort parts, both by comparison with reference batches or by statistical analysis of samples.

Eddy current testing services uses electromagnetic induction to detect flaws in conductive materials. The eddy current test set-up consists of a circular coil placed on a test surface. The alternating current in the coil generates changing magnetic field which interacts with the conductive surface and generates an eddy current.

The flow of eddy current can be disrupted due to changes in resistivity or conductivity, magnetic permeability, any physical discontinuity. The change in eddy current flow and a corresponding change in phase and amplitude is measured against known values.

Some notable applications of Eddy current test are;

2) Sorting of Material
3) Assessment of heat treatment conditions
4) Sorting of materials on the basis of hardness and strength
5) Measurement of thin components.

There is a growing interest in the application of this technique to the quality control (QC) of parts with complex geometries and/or manufactured using exotic techniques such as EDM, SLS, or water jet. Moreover, eddy currents can prove an attractive complementary technology for the detection of subsurface porosity.